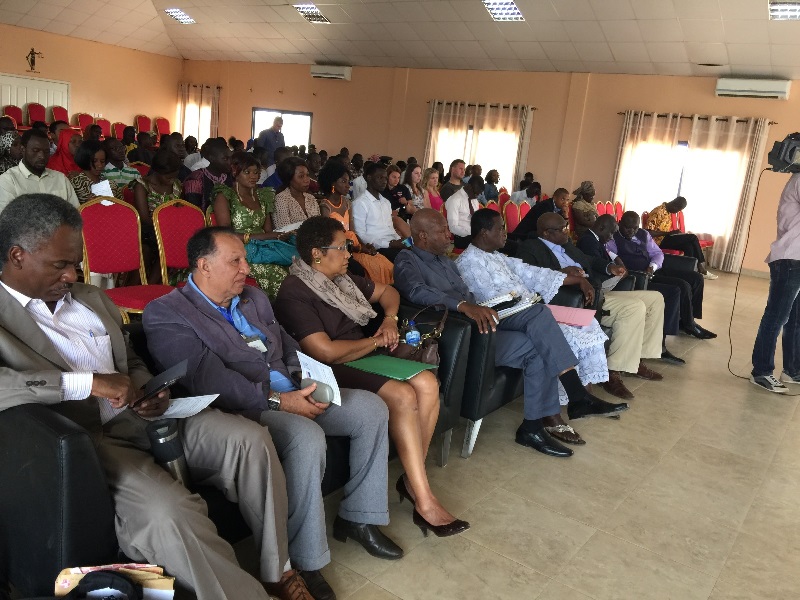 It is such a pleasure to join you today as we come together to celebrate Black History Month. Thank you to Dr. Omar Jah, Acting Deputy Vice Chancellor of the University of The Gambia for his warm welcome. I’d also like to thank Mr. Melvin for his moving renditions of both the Gambian and American national anthems, and Mr. John Charles Njie for reminding us so beautifully of the inspiring words of Dr. Martin Luther King, Jr.

In the United States (and now in other countries as well), February is a time when we reflect upon the challenges and triumphs of African-Americans throughout the course of our history. The contributions of African-Americans and of their ancestors who were brought unwillingly to North America as a result of the Trans-Atlantic Slave Trade are countless. Africans and African-Americans have played key roles in the development of the United States, from the early days of the slave trade, to the March on Washington led by Dr. Martin Luther King Jr., to the election – and re-election– of President Barack Obama.

In fact, if it were not for the tireless and thankless work of enslaved African laborers, the world economy would not be what it is today.

In the early days of our history, America’s colonies thrived thanks to slave labor. While land was plentiful, it was of little value without the labor necessary to plant and harvest crops. African slaves, who excelled at working the land and who had extensive knowledge of agriculture, were in high demand as European colonists sought ways to benefit from the natural resources of the New World.

As those slaves took to the fields, the crop production increased exponentially. Sugar, a particularly lucrative crop produced through slave labor, became the most important crop in the Americas. Nearly half of all slaves worked at sugar plantations. Slave labor transformed sugar, once a rare and costly spice, from a luxury to a widely-consumed commodity.

By the eighteenth century, sugar from the colonies was England’s most important and lucrative import. Demand for the slave-produced product resulted in the creation of a trade network that crossed the Atlantic and linked three continents. As the production of molasses, rum, and sugar from sugarcane juice became a booming business, demand for the crop continued to rise throughout Europe and the Americas. The availability of sugar led to the development of one of the earliest large-scale manufacturing industries and many believe the sugar industry was one of the catalysts of the Industrial Revolution.

In the United States, slaves were utilized by plantation owners growing tobacco, rice, indigo, and cotton. By 1850, nearly 2 million slaves of African descent worked cotton fields on plantations in the southern region of the U.S.

Enslaved workers toiling in cotton fields built the economy of the United States. Industries within the country and throughout Europe relied on plantation-grown cotton. As cotton plantations expanded throughout the South, banks and financial institutions in northern cities supplied funding and investment capital to plantation owners. The availability of cotton revolutionized the textile industries in the Americas and Europe and, much like sugar, resulted in an increase in trade and business relationships between countries. Cotton became the most commonly traded commodity in the world and was the United States’ largest export for more than 100 years, from 1803 through 1937.

As millions of slaves were growing the United States economy in the cotton fields, others were building the nation’s infrastructure. When the railroad came to the United States, slave labor was used to build thousands of miles of track across the nation.

The railroad reduced travel times between cities and enabled Americans to trade goods across the country in a more timely and efficient manner.

Elijah McCoy, an African-American man who was the free son of escaped slaves had a significant impact on the early days of the railroad. He developed mechanisms for oiling the steam engines of locomotives. Before Mr. McCoy’s invention, trains needed to stop frequently to be oiled and for routine maintenance. The “automatic lubricator” brought innovation to the American railroad, allowing trains to run at higher speeds for longer amounts of time. The invention was so successful that many companies tried to copy it and sell their own versions. In the United States we have a phrase, “the Real McCoy,” which is a metaphor for “the real thing” or “the genuine article.” The saying can be traced back to the time when railroad engineers would request “the Real McCoy” product by name.

The railroad carried Americans from the East Coast to the American West, giving rise to new economic opportunities and the development of new communities. As demand for new buildings across America grew, many slaves served as laborers who worked in construction and other trades. A number of the most well-known symbols of the United States were constructed, in part, by slaves and their descendants.

A man named Benjamin Banneker, another free descendant of African slaves, played a key role in developing the layout of the city streets and placement of buildings and monuments in the U.S. capital, Washington D.C. Banneker was hired to assist a man named Pierre L’Enfant, who had been hired by George Washington to design the city. Planning the capital city, however, proved to be quite the daunting task. L’Enfant quit midway through the planning process and took all of the plans that had been developed with him.

Thankfully, Banneker saved the project by reproducing, from memory, the complete and intricate layout of the streets, parks, buildings, and monuments. Banneker’s brilliant mind preserved the years of labor, surveying, planning, and designing that had been conducted up to that point.

In addition, such iconic buildings as the White House, the United States Capitol building, and the United States Supreme Court were built by the hands of slave laborers. Yes, it was the work of Benjamin Banneker and the labor of African slaves that built the foundation of Washington, D.C., a city that today remains the seat of power of the United States and is visited each year by millions from around the world.

African slaves and their descendants also played key roles in the fields of science and industry. One example is Onesimus, an African slave who lived and worked in Boston.

The practice of inoculation in the United States was sparked in the early 1700s by Onesimus, who had undergone inoculation in Africa before being captured as a slave. As smallpox threatened the city of Boston he instructed his master, Cotton Mather, on the inoculation technique.

Mather began experimenting with the technique and learned that when a healthy person was injected with a weaker strain of smallpox-injected fluid they became immune from catching the deadly disease. Mather wrote about his findings and when the city of Boston was struck by a smallpox epidemic he used the technique to protect the city’s residents. Inoculation was the inspiration for the practice of vaccination which has protected Americans and others around the world since its implementation in 1796. The smallpox vaccine became compulsory in 1853 and in 1979 the disease that Onesimus tackled with knowledge he brought from Africa was declared eradicated.

Slaves and their descendants had a significant impact on the United States economy when slavery was a common practice in the country, and they would continue to do so as free men and women after it was abolished. At the conclusion of the United States Civil War, in 1862, President Abraham Lincoln issued the Emancipation Proclamation, which committed the newly reunified country to end the brutal and dehumanizing practice of slavery.

It was not until the 1960’s, however, that the descendants of African slaves in the U.S. began to truly enjoy the promise of the Emancipation Proclamation and reap rewards from the economy that their labor had built. It was the 1960’s Civil Rights Movement, led by Martin Luther King, Jr and others like Medgar Evers and Andrew Young, that finally broke the bonds of slavery.

I would not be standing here before you today if it were not for the Civil Rights Movement.

When I was growing up in the U.S. South in the 50’s and 60’s the schools were segregated, the restaurants were segregated, and, if you can believe it, even the beaches were segregated. When my father filed a lawsuit against the city where I grew up to desegregate the city swimming pool, the city destroyed the swimming pool rather than allow blacks to use it. But the Civil Rights Movement eventually changed all that.

One hundred years after the Emancipation Proclamation, in August 1963, the March on Washington descended upon the U.S. capital and captured the attention of the world. The Washington Post noted that “[u]ncounted millions from Accra to Zanzibar turned their eyes to Washington as they have for few other events in American history.”

The call for equality for people of all races and Martin Luther King, Jr.’s famous “I HAVE A DREAM” speech reminded Americans and the rest of the world of the nation’s oft-forgotten founding principles of liberty and equality for all.

Were it not for those who came together to demand equality, the United States would not be the country it is today. While the nation was founded on the principles of freedom and equality, it was the voices of thousands calling for those principles to be honored that made those tenets more of a reality than ever before and paved the way for future generations of African-Americans to rise as leaders of the nation.

This is my story and the story of all the descendants of African slaves in the U.S. Thank you for allowing me to share it with you.