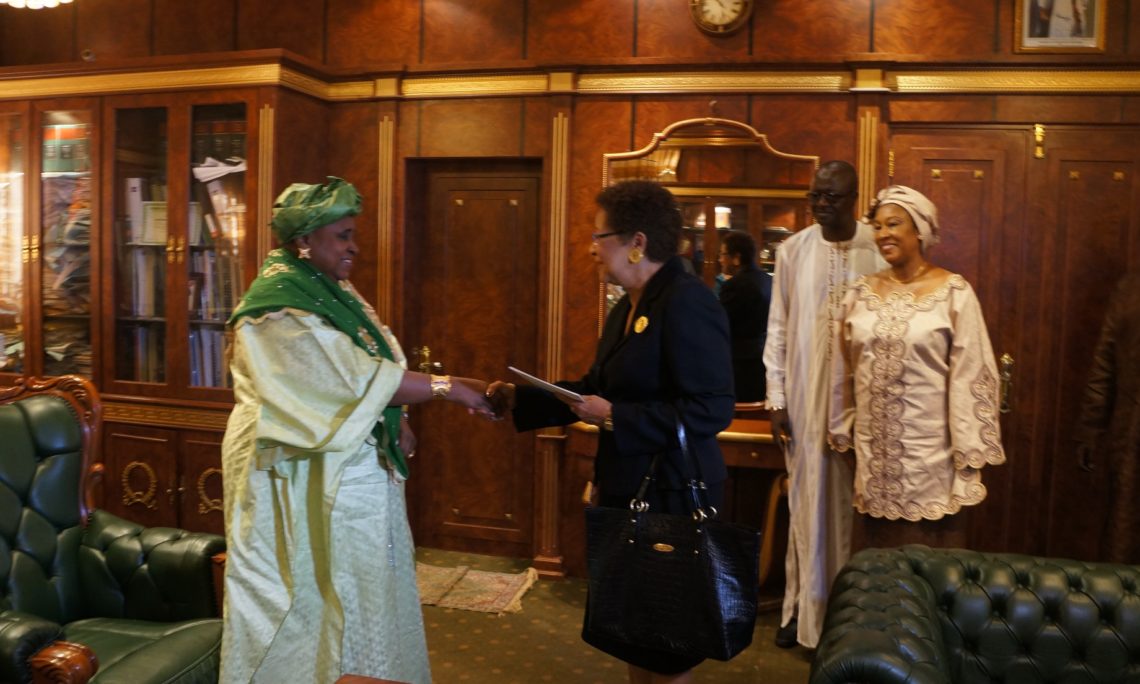 The Ambassador Extraordinary and Plenipotentiary of the United States of America to the Islamic Republic of The Gambia, Carolyn Patricia Alsup,on Monday, January 11, presented her letters of credence to the Vice President and Minister of Women’s Affairs, Dr. Isatou Njie-Saidy, during a formal ceremony at State House in Banjul.

“It is my sincere hope that we will share information freely, collaborate openly, and work together tirelessly to improve relations between our two great nations, and further better the lives of the warm, welcoming people of The Gambia,” Ambassador Alsup said at the ceremony.

Ms. Alsup was nominated by President Obama as Ambassador to the Republic of The Gambia on June 8, 2015.  She was confirmed by the Senate on October 8, 2015 and was sworn in on October 30, 2015.  Ambassador Alsup arrived in The Gambia on Friday, November 6, 2015.  She is a career member of the Senior Foreign Service.  Most recently, Ambassador Alsup was the Deputy Chief of Mission at the U.S. Embassy in Accra, Ghana from 2012-2015.  Prior to this posting, she served as the Director of the State Department’s Office of Central African Affairs.  She also served as Deputy Chief of Mission in The Gambia from 2005 to 2007.

Ambassador Alsup joined the Foreign Service in 1992, after working in the private sector in market research, strategic planning, and economic development.  Her assignments since joining the State Department have included Special Assistant in the Office of the Under Secretary for Economic, Energy and Agricultural Affairs, Desk Officer for the Eastern Caribbean in the Office of Caribbean Affairs, and Career Development Officer in the Office of Career Development and Assignments.  Her other overseas tours include assignments as Consular Officer in Santo Domingo and as Assistant Financial Attaché in Mexico City.

Ms. Alsup was born and raised in St. Petersburg, Florida.  She graduated with a Bachelor of Arts Degree in economics from Wellesley College and a Masters of Business Administration in marketing from Harvard Business School.  She also earned a Masters of National Resource Strategy degree from the Industrial College of the U.S. Armed Forces in 2008.