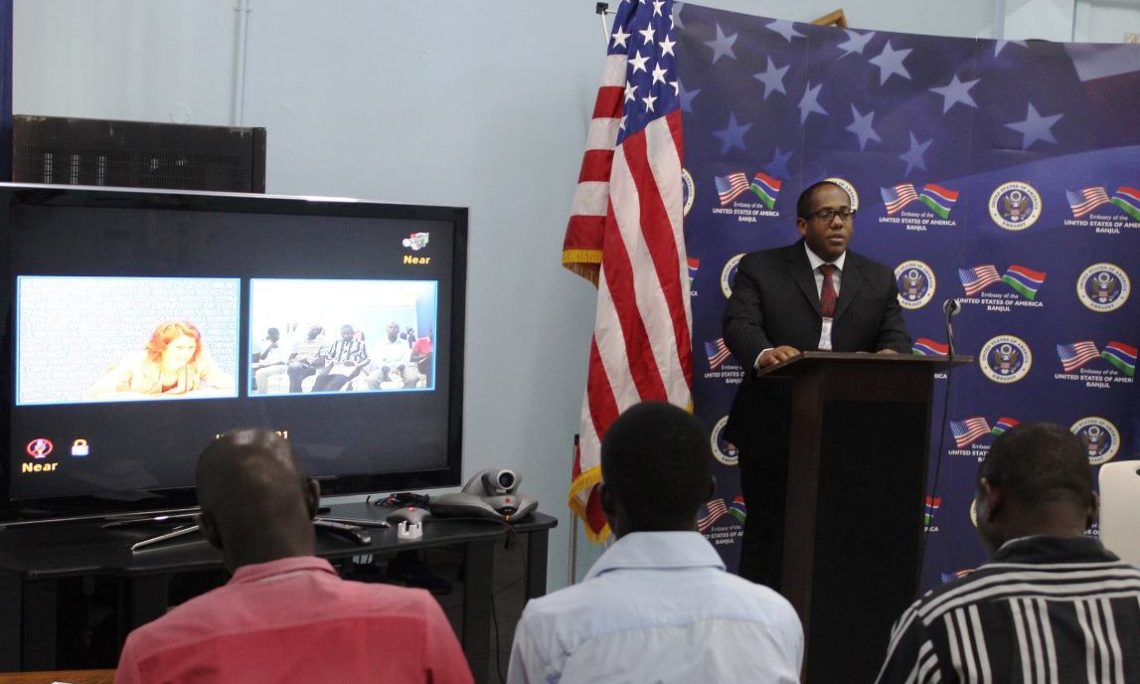 Good morning ladies and gentlemen!  I am very pleased to be with you this morning for this important Message Development Workshop.  I believe this is an important first step to increase electoral awareness and strengthen The Gambia’s democratic space ahead of the December 1st presidential election.

The U.S. Embassy is proud of this project, and we are happy to be partnering with Media Agenda for the second time in one year to build and enhance the capacity of Gambian journalists.

This message development workshop is a crucial element in the U.S. Mission’s overall election strategy for The Gambia.  With elections rapidly approaching, we want to do all we can to promote a free, fair and transparent democratic process.  The goals of this project are to expand civic empowerment and community engagement, improve voter education, and train broadcasters to be better journalists.

Ladies and gentlemen, the two pillars of promoting democracy and respect for human rights have long served as the underpinning of U.S. foreign policy.  President Obama has underscored the importance of these principles in our engagement everywhere, including here in The Gambia.

Elections provide crucial opportunities for citizens to hold their leaders and political parties accountable.  They give ordinary citizens a role in determining the future of their nations through peaceful political competition.

Through our diplomacy and our assistance, the United States remains committed to supporting credible, transparent, and inclusive elections, encouraging respect for the political rules of the game, and reducing the likelihood of violence during elections.  Around the world, and here in The Gambia, we call for the fundamental rights of political opponents to be fully and unconditionally respected, and for all political parties to freely conduct their campaign activities without obstacle.

The United States believes in and supports the democratic process.  That support includes voter registration and civic education programs; building the capacity of election commissions; strengthening political parties; training official and unofficial civil society election observers; and ensuring that women, youth, and people with disabilities are included at all stages of the electoral process.

This training is very much consistent with our commitment to promoting democratic values.  It is our strong conviction that an informed electorate will make informed decisions at the polls.  Experiences from other sub-Saharan African countries show that pervasive voter apathy was largely due to a lack of necessary voter education.  Too often, people lose interest in the democratic process because they feel their vote doesn’t count, or because governments neglect civic education programs.  We don’t want to see voter apathy take hold in The Gambia, and what better medium to create an enthusiastic and informed electorate than the broadcast media!

Ladies and gentlemen, no one can deny that media plays a vital part in the democratic process.  Its role must be understood and nurtured to enable it to deliver on its core mandates – informing and educating.   Message development is at the heart of these mandates.  The messages you develop here will be broadcast on radio stations across the length and breadth of the country.

They are sure to have a far-reaching impact.  Through these messages, rural communities will better understand their roles and responsibilities as an electorate.  We hope that they will also better understand the duties that representatives owe to their constituencies.  I believe that this sort of citizen empowerment is essential for any democratic process.

A vibrant and empowered civil society is a cornerstone of democracy because it promotes inclusiveness, transparency, rule of law, and human rights.  President Obama elevated democracy and governance as key priorities for his Administration when, on the margins of the 2013 UN General Assembly, he launched Stand with Civil Society, reaffirming the rights to freedom of assembly and association globally.

I strongly agree with President Obama that the real ingredients for democracy include not only free and fair elections, but also freedom of speech, freedom of the press, and freedom of assembly.  These rights are universal!   People must be able to exercise these rights without any fear of reprisal.  During critical periods like elections, citizens must be allowed to freely associate themselves with anything they find of value and interest.  We expect that governments will widen the democratic space for the participation of every citizen.

2016 presents a litmus test for The Gambia and its political leaders.  The Independent Electoral Commission has cleared nine political parties to contest the polls.  We have already seen unrest and protest, followed by trials and imprisonment.  This shapes an uneasy political path.  It is therefore vital that political leaders and actors conform to best electoral practices, promote democratic values, and avoid any actions that will promote further chaos and violence.

As elections approach, we also have the opportunity and responsibility to recognize the role of journalists.  Journalists and other members of the media should be able to freely investigate, research, publish, and share news, information, and opinions on electoral matters without fear of reprisals.  Governments are responsible for protecting journalists from physical harm and intimidation at all times, but more so during elections.  As President Obama rightly once proclaimed, “democracy is not just formal elections – …when journalists are put behind bars for doing their jobs, or activists are threatened as governments crack down on civil society – then you may have democracy in name, but not in substance.”

Journalists also have a responsibility to their audiences, and to the broader international community.  They must adopt best practices in election coverage and reporting.  The job of the reporter is to report the truth and nothing else!  Journalists must address issues objectively, factually, and responsibly.  That’s why as part of our election strategy, we are currently exploring avenues to provide more election-related training for Gambian journalists.

Concluding, I want to thank Media Agenda for working with the Embassy to deliver this important project for Gambian journalists.  I also want to thank every one of you for your commitment to the civic empowerment of your people.  My Embassy will continue to engage key actors, including the government and civil society for the widening of the democratic space and the continuous empowerment of the citizens.

Thank you and have a wonderful session.