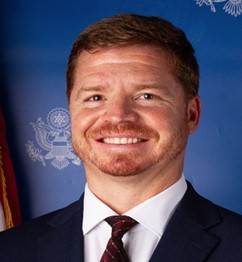 A career member of the U.S. Department of State, Jason Willis has been the Deputy Chief of Mission at the U.S. Embassy in Banjul, The Gambia, since August 2021.  Previously, Jason served as the Regional Security Officer at the U.S. Embassy in Lusaka, Zambia, and in Bamako, Mali, where he was knighted Chevalier Ordre National du Mali and was awarded Regional Security Officer of the Year by Diplomatic Security.  Prior to those assignments, Jason served overseas at the U.S. Embassies in Bishkek, Kyrgyzstan, and Kabul, Afghanistan.  Domestically he served in Washington, D.C. with the Bureau of Diplomatic Security.  Before joining the State Department, Jason worked with a management consulting firm in the Iraq Policy Operations Group, the interagency coordination effort for the war at the Department of State.  He later served at the U.S. Embassy in Baghdad, Iraq, during the ‘Sunni awakening’ as a desk officer for four provincial reconstruction teams in Anbar Province.  He was also a Staff Sergeant and Marine Security Guard in the U.S. Consulate in Cape Town, South Africa, and U.S. Embassy in Rangoon, Burma.  After leaving the Marines, Jason studied International Relations and Mandarin Chinese at American University in Washington, D.C., and completed an economics internship at the U.S. Embassy in Beijing, China.  He speaks Chinese, Russian, Spanish, and French.  Jason is originally from Florida and he is married to Andrea Barbosa, a native of Colombia and an engineer turned lawyer who currently works in development.  They recently welcomed their first child, Olivia.