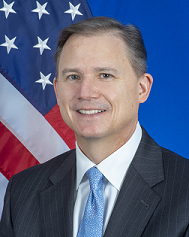 Ambassador Paschall arrived in The Gambia on March 14, 2019, and presented his credentials to His Excellency President Adama Barrow on April 9, 2019.

Richard “Carl” Paschall, a career member of the Senior Foreign Service with the rank of Minister Counselor, is the U.S. Ambassador to the Republic of The Gambia.  A career diplomat since 1991, Ambassador Paschall most recently served as the Deputy Coordinator (Deputy Assistant Secretary of State equivalent) for Military Coordination and Operations in the Bureau of Counterterrorism at the State Department.  Previously, he served in leadership positions in the Bureau of African Affairs at the State Department, at the U.S. Embassies in Iraq and Chad, and as Foreign Policy Advisor to the Commander of the Special Operations Command-Africa. Mr. Paschall earned a B.A. from University of North Carolina-Chapel Hill and a M.S. from the National Defense University. He is the recipient of numerous notable State Department awards as well as the Chairman of the Joint Chiefs of Staff Meritorious Civilian Service Award.

For more information about Ambassador-designate Paschall, please see the following: