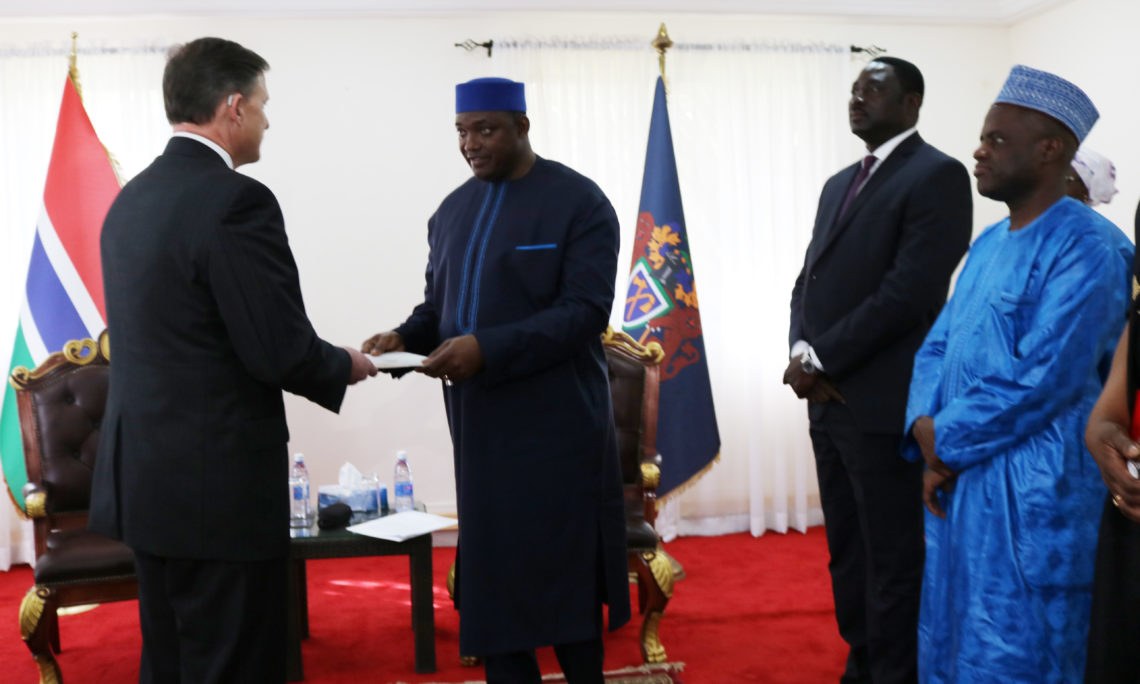 The Ambassador Extraordinary and Plenipotentiary of the United States of America to The Gambia, Richard ‘Carl’ Paschall III, presented his letters of credence to the President of the Republic, Mr. Adama Barrow, on April 9, 2019 during a formal credentialing ceremony at State House in Banjul.

Ambassador Paschall was accompanied to State House by his spouse Colonel (U.S. Army, retired) Jane Ellen Paschall, Deputy Chief of Mission Shelly Seaver, and other Embassy officials.  During a closed-door meeting with The Gambian leader, Ambassador Paschall thanked President Barrow and his government for the warm welcome and for the cordial relationship

between Banjul and Washington.  He noted that the U.S. and The Gambia have a long and deep relationship and gave his assurances that the United States of America will continue to support The Gambia as it implements its National Development Plan.  “We will support the transition led by the people of The Gambia to help build the capacity that will allow this country to become a leader in democratic reform, strengthened accountability of government institutions, and emerging economic vitality,” he remarked.

Ambassador Paschall and his wife Jane Ellen arrived in Banjul on March 14.  On Friday, March 15, U.S. Embassy employees greeted Ambassador and Mrs. Paschall in a town hall gathering followed by an internal reception.  Gambian and American Staff greeted the Ambassador with a traditional ashobi celebration.

Paschall was nominated by President Donald J. Trump as Ambassador to the Republic of The Gambia on August 16, 2018, and confirmed by the Senate on January 2, 2019.  Ambassador Paschall has been an American diplomat since joining the Foreign Service in 1991 and holds the rank of Minister Counselor.  Ambassador Paschall most recently served as the Deputy Coordinator (Deputy Assistant Secretary equivalent) for Military Coordination and Operations in the Bureau of Counterterrorism at the State Department.  Among his previous assignments, he served in leadership positions in the Bureau of African Affairs at the State Department, at the U.S. Embassies in Iraq and Chad, and as Foreign Policy Advisor to the Commander of the Special Operations Command-Africa. Ambassador Paschall earned a B.A. from University of North Carolina-Chapel Hill and a M.S. from the National Defense University.