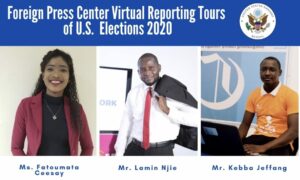 Banjul, The Gambia – The United States Embassy in The Gambia congratulates three Gambian journalists selected to participate in the 2020 “Foreign Press Centers Program for Elections 2020: A Virtual Tour of the United States and the American Electoral Process.”

The journalists – Lamin Njie, Editor-in-Chief of The Fatu Network, Fatoumata Ceesay, Senior Editor at the Gambia Radio and Television Services (GRTS), and Kebba Jeffang, Senior Reporter at The Chronicle – are among 63 African journalists, and 227 worldwide, selected to take part in this program.

Congratulating the journalists, the United States Ambassador to The Gambia, R. Carl Paschall, praised the trio for being selected to take part in such a prestigious program.  He said the U.S. Mission is very excited about the participation of The Gambia in Foreign Press Center programs after a many year hiatus. He said: “We have been inviting journalists from around the world to cover the U.S. elections since the 1940 and it has been quite a successful program.  Thank you to Lamin, Fatoumata and Kebba for their interest and willingness to participate in this program.” The Ambassador said strengthening democratic institutions like the media is one of the key goals of the U.S. Mission in The Gambia, and the selection of Gambian journalists reflects the improved media freedom environment in The Gambia.

This unique program will be a virtual reporting tour series, taking place over a 10-week period from September to November, that will bring participating journalists close to the action, albeit in a virtual format, with access to subject matter experts and tailor-made video content that will offer exclusive insights into the electoral process.  Building off its successful model for in-person reporting tours, the Foreign Press Center has identified locations around the United States that will be critical in the upcoming elections and that will interest foreign reporters.

The 2020 U.S. general elections will be held on November 3. The United States government began its official support of foreign journalists covering the United States in 1946. The Foreign Press Centers support U.S. policies by helping foreign media cover the U.S.  It deepens understanding of U.S. policy and American values through engagement with foreign media.